On Wednesday 15th January, Black Firs Primary School were visited by ex-pupil Tom Mullins. Tom attended Black Firs as a pupil from 1997-2004. His mum, Mrs Joanne Mullins is currently a TA at the school and he decided that it would be a lovely surprise to do a fly-by. He contacted the school in secret and arranged it all, then showed up on Wed in the helicopter! The children absolutely loved it and haven’t stopped talking about it. Mrs Mullins has become even more popular than ever before with the children and at least half of our pupils now want to become helicopter pilots when they grow up!

Flt Lt Mullins belongs to the 28th Squadron which is based at RAF Benson in Oxfordshire. He was able to make the flight in a Puma helicopter on his way to a training sortie in Manchester.

We managed to keep the whole thing secret from Mrs Mullins and the children, and had to stage a Fire drill in order to get everybody out of the building and onto the playground to see the helicopter.
The original plan had been to land in the school grounds but unfortunately the helicopter was too heavy for our all-weather pitch, so he came in on a very, very low hover instead.

Tom came back in to School on Friday 17th in his flying suit to talk to the children in their classes and answer questions. Talk about expectations and life-long-learning! 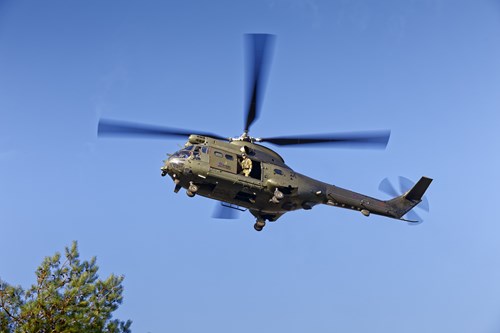