Letters of War Performance at the Town Hall 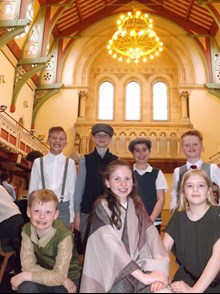 Letter of War Performance at the Town Hall

On Monday 26th February, our Year 5 children took part in a series of drama workshops about World War 1. This was a fantastic experience for all of the children. Following on from these workshops, we were invited to be part of a performance, alongside a professional cast, at Congleton Town Hall along with three other Congleton schools.

Children all came in simple costume to indicate the time period... flat cap or braces for the boys worn over their school trousers and shirt, a shawl or pinafore for the girls over a school skirt.