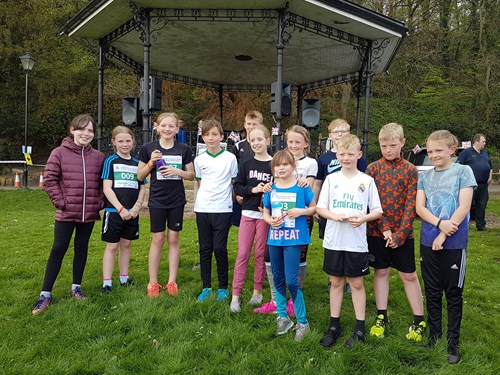 Here is Sammy and Lola's report on the event.

The first event, which was swimming, was completed by Joe, Abbie, Amy and Joe. They each swam six lengths of the in the leisure centre swimming baths. The next event, which was cycling, involved Zak, Lewis, Sammy and Owen. After a hard seven and a half laps, Lewis came in first, followed very closely by Sammy. Next were the runners, Connie, Lucy, Lola and Olivia. They ran four times around the course and Lucy came in first, followed by Connie, then Lola and finally Olivia. In the overall Junior event, we managed to get first, second, fourth and sixth places!

The teams were: Sammy, Abbie and Lucy who came first, Lewis, Amy and Connie who came second, Lola, Zak and Joe who came fourth and Joe, Owen and Olivia who came sixth. A big thank you to the children who took part and the families who came to support them; it was a great afternoon.