Languages
At Black Firs we believe that many children really enjoy learning to speak another language. We also believe that the earlier a child is exposed to a foreign language, the faster the language in question is acquired. We also believe that it is a good idea to introduce a new language to children when they are at primary school, as they tend to be less self-conscious about speaking aloud at this stage of their development. It is widely believed that the early acquisition of a foreign language facilitates the learning of other foreign languages later in life.
At Black Firs we aim to bring the subject ‘alive’ in order to capture the many attributes that form our children’s holistic development. These include role play, culture studies and more. We aim to ensure that our children experience MFL in as many creative ways as possible, with the intent of being able to become adept in using languages and understanding cultural diversity.
The main objective of teaching a modern foreign language in primary school is to promote the early development of a child's linguistic competence. We base our teaching on the guidance material in the QCA scheme of work for modern foreign languages. We have adapted this to the context of our school and the abilities of our children. We use a variety of techniques to encourage the children to engage actively in the modern foreign language: these include games, role-play and songs (particularly action songs).
Whenever possible, we invite native speakers into the classroom, in order to expose the children to more than one voice in the foreign language. We frequently use mime to accompany new vocabulary in the foreign language, as this teaches the language without the need for translation. We emphasise the listening and speaking skills over the reading and writing skills. We also use a multi-sensory and kinaesthetic approach to teaching, i.e. we try to introduce a physical element into some of the games, as we believe that this serves to reinforce memory.

*When using the Mindmap, to view evidence for statements, click on the

at the end of each statement or the

on the right of the page to follow links to Earwig where the evidence is stored. You will need to log in with the details - User: blackfirs@black-firs.co.uk and the Password: Parent1 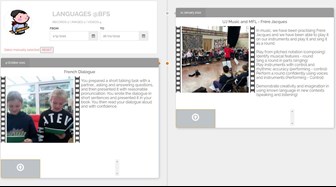