Click on the link below to see todays Sway, detailing all of the activities to complete remotely at home. 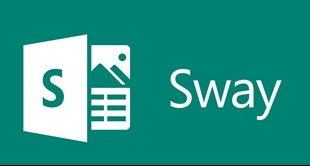 Once opened, click on each subject title to open a Sway containing our Medium Term Planning for that subject.

Our class-book this term is 'The Invention Of Hugo Cabret' written by Brian Selznick.

Twelve-year-old Hugo lives in the walls of a busy Paris train station, where his survival depends on secrets and anonymity. But when his world suddenly interlocks with an eccentric girl and her grandfather, Hugo's undercover life, and his most precious secret, are put in jeopardy. A cryptic drawing, a treasured notebook, a stolen key, a mechanical man, and a hidden message from Hugo's dead father form the backbone of this intricate, tender, and spellbinding mystery.

Our class-book this term is 'Shield Maiden' written by Stuart Hill.

The story of King Alfred's daughter Aetheflaed the King battles the Vikings. Perfect for fans of historical adventure. When King Alfred's great hall is destroyed by the Vikings, the king must flee with his family. But his daughter Aethelflaed knows that hiding in the marshes, far away from the battlefield, is the last thing she wants to do; can she fulfil her destiny and become a warrior princess, a shield maiden?

Our class-book this term is 'Harklights' written by Tim Tilley.

Wick has always lived in the dark and dreadful Harklights Match Factory and Orphanage, working tirelessly for greedy Old Ma Bogey. He only dreams of escaping, until one day a bird drops something impossible and magical at his feet - a tiny baby in an acorn cradle...  As midnight chimes, Wick is visited by the Hobs, miniature protectors of the forest. Grateful for the kindness shown to their stolen child, they offer Wick the chance of a lifetime - escape from Harklights and begin a new life with them in the wild...  Winner of Best Children’s Book at the Junior Design Awards. Winner of the Joan Aiken Future Classics Prize, Harklights is a magical story celebrating family, friendship and the natural world, filled with a message of hope for our times.

Our Class-book this term is 'Remembering Green' written by Lesley Beake.

It is the year 2200. Global warming has covered most of the Earth in sea. The Tekkies survive on dwindling resources, but they need rain. A sacrifice is needed, something wild. But one African girl with her lion cub, Saa, still carries the old knowledge and is determined to thwart the Tekkies.

Our Class-book this term was going to be the Iliad and the Odyssey abridged Gillian Cross and Illustrated by Neil Packer. 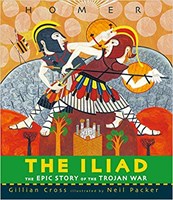 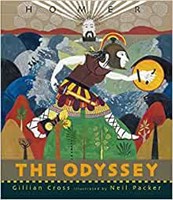 Gillian Cross's brilliant retelling and Neil Packer's glorious illustrations bring to life Homer's Iliad, one of the greatest stories ever told. The team behind The Odyssey (2012) now tell the story of the Trojan War. Cross's vivid adaptation begins with a beauty contest: the prize, a golden apple. In return for securing her victory, the goddess Aphrodite helps Prince Paris abduct Helen, wife to the king of Sparta. Enraged, the king and his Greek allies wage war on the Trojans. Nine years later, the fighting still rages on, but the Greeks are beginning to quarrel among themselves – Achilles and Agamemnon's petty argument has dire consequences for everyone caught in the crossfire. Neil Packer's pictures capture the beauty and remoteness of the setting, and bring a profound humanity to one of the finest literary achievements of Greek civilisation.

Homer’s great story, The Odyssey, is retold with simplicity and style by award-winning children’s writer Gillian Cross, and vividly brought to life in Neil Packer’s stunning illustrations. It charts the ten year epic voyage of Odysseus as he returns from the Trojan War to the island of Ithaca. On his journey he encounters all manner of perils, from the man-eating Cyclops and the evil sorceress Circe, to the deadly lure of the Sirens and the wrath of the sea-god Poseidon. Neil Packer’s striking imagination, and his extraordinary use of colour and dramatic silhouettes, capture the terrors of Odysseus’s travels as well as the dangers faced by his wife Penelope and his son Telemachus at home. The illustrations are a perfect complement to Gillian Cross’s beguiling narrative, which transports the reader effortlessly into Homer’s world.

Since we are now on Remote Learning, we are going to focus on Greek Myths & Legends and complete this book when the children come back to School. 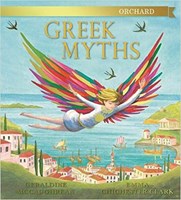 Discover the drama and thrill of sixteen classic Ancient Greek myths in this glorious story collection. Featuring all of the best-known stories retold by master storyteller, Geraldine McCaughrean and fabulous artwork throughout. Stories include: Theseus and the Minotaur; Pandora's Box; Perseus and Medusa; Jason and the Golden Fleece; Daedalus and Icarus; Orpheus and Eurydice; Arachne; The Wooden Horse of Troy; King Midas; Persephone and the Pomegranate Seeds; Echo and Narcissus; The Twelve Labours of Heracles; Odysseus; Apollo and Daphne; Atalanta's Race; Freedom for Prometheus.